oral fixation, the executive branch, and you!


BIG GAY WIN -
Gov. Schwarchsldkfjghgehrgernator signed Harvey Milk Day into California law. A couple reasons this made me happy. One, it pisses off those that passed Prop. 8, and I'll take that opportunity whenever it's offered. Two, did you SEE the movie? Yeesh. Cry-fest. Three, and arguably my favorite aspect, GovSchwarz reversed his own position from a year ago when he vetoed a similar bill. So few in the political game have the stones to reverse themselves, especially when it pisses off their ideological base. So kudos to you, Arnold. A firm, open-handed swat on that tight tush for doing the right thing.

he does love a good cigar...
BIG GAY LOSS -
I hate to say this, I really do, but someone who will NOT be receiving a rainbow flag in his stocking is the one and only President Obama. Now to be fair, The Big BO has a lot on his plate; health care and jobs and proving to the nut-job extremists that he's not a Kenyan militant. But we (the editorial "we" as in "me, the voice of Gay America") have been patiently waiting for our campaign favors to be paid back; but days turn to weeks turn to months, and we're no strangers when it comes to smooth-talking men who don't follow up on promises. Defense of Marriage Act? Don't Ask, Don't Tell? Ring any bells? Fool us once, Obama, but be warned that hell hath no fury like a homo scorned. 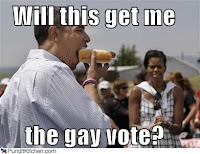 Lastly....do you ever do the thing where you flip on the radio and your heart bursts with happiness when you hear a long-lost favorite song? But just as you take a deep breath to belt out some powerful car karaoke, you realize it's the last few beats of the song, and what was going to be two minutes of personal awesomeness slips away too soon, lost to bad timing and an Autozone commercial. Then you're almost bummed you even heard that little bit, because now the following songs just aren't as exciting, even if you like them. Why couldn't you have thought to act just a minute earlier? And yeah it was just a song on the radio, but if you can't look forward to the little victories, what else is there? Of course that applies to more than the FM dial...but the feeling remains the same.


And that's all there is to say about that. Time to call the models.

Happy Columbus Day (be honest, did you even know?)