So here's the skinny - this week was a real challenge when it came to updating. Not entirely sure why, but similar to the first time you received anal....something just didn't feel right.

Wow...hard to transition out of a sodomy reference. Need to remember that. Anyhoo...

I was going to write all about the Festival of Substance Abuse, aka Dad's 50th, but I struggle with creating a series of "and then....and then.....and then...." moments, especially when the humor of the scene is easily lost when you're not some form of impaired. I still might milk a post out of that trip. To be determined. And then between this, that, and the other, nothing came to fruition. But fear not. The day was saved by none other than the US Postal Service.

We received a wig catalog.

Why? Fuck if I know. We get all sorts of bizarre items delivered to the office. My favorite things are the unsolicited packages we get from people looking for agents, because there's generally a reason they don't have an agent, and that reason is they're ugly. However I think even though those submissions become legal property of the office, they don't become legal property of me, meaning I can't remove the names and post them here so you could take part in the joy that is judging others based on looks. Sorry. But stop by any time if that sort of thing jiggles your bits, we have a hidden wall of shame where we keep our favorite homely strangers.

Back to the wigs....WOW. I didn't know such a joyous publication existed. First off, 75% of the wigs have women's names, so instead of calling in to order "a shabbily conspicuous collection of someone else's fur," you can confidently order a "Gwyneth." The other 25% are named within the same category as douches or streets in a housing development: "tranquility," "enchantment," and "bayside"were among my favorites.

So I'm perusing the wig selection and come across my new favorite item of all time: THE WIGLET. 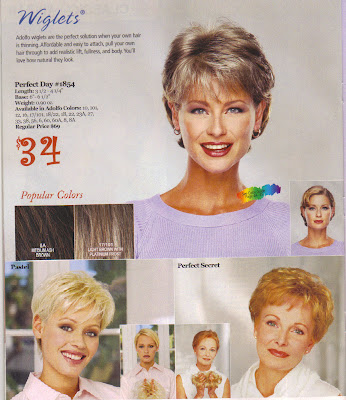 Ohhhhhhh my god. Ohmygodohmygodohmygod. As if normal wigs aren't enough fun, for $34 you can get a big ol' handful of what looks frighteningly similar to what covers the bathroom floor after I man-scape and WHAMO you're a new lady, just like that. Who are these models? Pastel there on the left, her "before" picture looks like it was snapped right as someone told her Grandma bought the farm. As for Perfect Secret....she just hates her life because she's a ginger. As she should.

So now you all know what I'm giving as Christmas gifts.

That's all. Sorry I don't have any deep meaningful insights on life. But as it's Friday night, happy weekend to all....party till your Wiglet falls out.
Posted by The Duchess at 1:38 PM