a different kind of zoo

Lions and trannies and bears, oh my!

I didn't actually have anything to say regarding lions. I just needed a tie-in to trannies and bears. Sorry if I got your hopes up. As a peace offering I give you these two saucy kitties, proving they can in fact feel the love tonight. 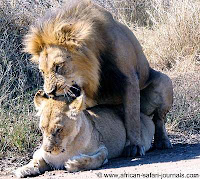 Not to sound all ever-since-my-alien-abduction-the-TV-speaks-to-me, but last night it seemed as though every show was telling me to stop being life's power bottom and actually work towards a goal if I truly want it. I know, very bossy for network primetime, but a valid point all the same. The past year or so I've become what could politely be called "comfortable" and could impolitely be called "a chubby lazy fuck." Not that I'm buying husky jeans, but the beer to exercise ratio is growing more imbalanced by the day. So today, flush with determination and motivation and perspiration, I did what any good red-blooded American would do.

I bought Jillian Michael's 30 Day Shred DVD and a set of 8lb handweights. 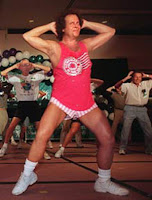 I mean, thank god I (a) have no shame and (b) shop at the West Hollywood Target, because I practically out-gayed myself by 12:30 but in that setting no one batted an eye. Of course I waited in line to be checked out by Desi, the reigning queen of Tranny-Town that holds court at checkstand seven. While her gigantic man-hands complete with press-on nails picked up my little eight pounders, she eyed me and dead-panned "good luck with that" while her adams apple bobbed in agreement.

But yes. Jillian is going to shred me and I'm going to love it. Normally I would be weary of the whole at-home workout thing, but the woman clearly has a bigger set than I do, and I have no doubt her digitally recorded self will have me in tears by the time we get to cool-down. I'll keep you posted.

If you thought this was going to be about rotund hairy gay men, swing and a miss. I'm referring to the Berenstain Bears, and how they're pissing me off.

I know...forget health care. I have bigger fish to fry.

For whatever reason, the Ralph's next to my office sells Berenstain Bears books. Odd choice, paperback children's books next to the avocados, but I've seen weirder (re: Desi). Anyway, my heart swelled with reminiscent warm n' fuzzies the other day as I was a big BB fan, owning most of the books and always enjoying the very vanilla-ness of the books. They went to the zoo. They learned manners. Normal kid stuff.

So as I glanced over to see what the 21st Century brought to the Bear family, I was puzzled to see they'd apparently all found the Lord? Now they "say their prayers." They "ask the big question." And in case you needed it dumbed down to the lowest common denominator, they beat the children of America over the head with "The Berenstain Bears: God Loves You!"

I get along fine with God, Buddha, Abraham, Muhammad, Father, Son, and Holy Ghost with special guest Creedence Clearwater Revival, whatever. If that's your thing, more power to you. But the Berenstain Bears? Leave them out of it. They were teaching kids right from wrong because it's just what you do, to hopefully point them down the path of upstanding adulthood without fear of eternal damnation if they fuck up. The Bears were great for godless heathen children like me. But I'm also the kid that went to Bible Day Camp for six hours, sat in a corner and cried the whole time, and begged not to be sent back. So I'm arguably biased. It makes me want to take another beloved children's series and swing it the other way. Maybe the Boxcar Children. Remember them? Well be on the lookout for my adaptations, including "Henry and Violet take a bong rip." Maybe "Jesse buys Plan B," or since I get to choose their adventures, "Benny discovers show tunes."


And all of that is what goes through my head on a typical Thursday.
Now you know why I'm slow to get anything done.
Happy almost Friday, amigos.