vienna waits for you

I don't think I'm going to change the world today.

I mean, it's only mid-afternoon. A productive blitz could occur, but to what end I'm not entirely sure. Curing cancer looks daunting. Hunger and the global economy seem to be in it for the long haul. And I'm bound to start thinking about dinner before equality comes around.


It is Tuesday October 27th, 2009, and I am the Maytag Repairman of humanity. 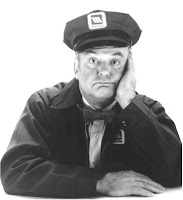 If you don't get that reference, ask your parents
I don't not care. But I'm alone, in the office and elsewhere for that matter, and it's just overcast enough to consider finding both a couch on which to rest and a star on which to wish. The radio is on a station that plays hits from the 90's, so it's basically DJ Daydream spinning nostalgia on the 1's and 2's.

Strange but true? It's insanely windy outside, but I've shut all the windows so I'm in a little bubble of calm while leaves and trash and atmosphere swirl around, all frantically going somewhere whether they like it or not.


Never leave for tomorrow what the early bird can carpe diem, so on and so forth. These mantras of positivity, generally found in motivational speeches and fortune cookies, they're not wrong. But just as not every swing will be a grand slam, not every day will be a pinnacle of productivity.

I will not go down in history because of my contributions on today, October 27th, 2009, and I'm fine with that. True, I could walk outside and take a wayward palm frond to the temple, game set match for Mother Nature. That could happen, before I see Fiji, before I get published, before I work up a real solid obituary. I guess that's the chance you take, ya know, being alive. Big picture? Which is worse, the occasional treading of water or your main motivation being a constant fear of the end? I don't think I'm a bad person because I spent more time today on Wikipedia than in a soup kitchen. I like to think it all evens out.

Seems to be a constant thing lately; don't get too high on the highs, and don't get too low on the lows. I've been blessed with a few helpings of good fortune lately. But just because a day wasn't worth writing home about doesn't mean it wasn't worth living.

So if you have a day like I did today, Tuesday October 27th 2009, don't beat yourself up. There will most likely be a tomorrow, excluding kamikaze palm fronds, and regardless of how it goes...Vienna will still wait for you.