This weekend I saw a senior citizen take Communion in gold hot pants. 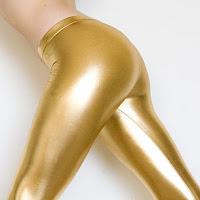 Who says one can't be stylish whilst receiving the body of Christ?

This has little to do with anything forthcoming. But I needed you to know. Gold hot pants. Old woman. Catholic wedding. The only thing that kept me from laughing out loud was the GIGANTIC Jesus (looking quite heroin chic, I might add) looming over me. Giant Jesus demands solemnity. I've sinned in ways the church hasn't even banned yet, and I still wore a tie. Even matched it to my shirt. But apparently the dress code is a gray area when you're in good with the Boss.


When I wasn't avoiding the cold stare of Gigantic Jesus, I did actually pick up on something enjoyable. As this was a grande Mexican wedding, everything was bi-lingual. The priest went into an explanation of the saying si Dios quiere, which in case you ditched seventh grade Spanish, loosely translates to "if God wants it."

I'll spare you the drawn out sermon; bottom line, sometimes we have to realize certain decisions are out of our hands. Even though this particular phrase invokes a higher power that I'm not entirely sure pulls my strings, it stuck with me all the same.

Fast forward to today, when I was holding down the backseat on the long drive back to the left coast. As I'm more than guilty of having what second graders call a "staring problem," I love gluing myself to the fun side of a tinted window and watching the soap opera of lives concurrently heading west on I-10. Retirees and road trips. Endless entertainment.

As we continued along, 80mph and too many cacti to count, the following entered my screen: an older, nondescript white hatchback driven by and older, nondescript white woman, neither memorable at first glance. The back of the hatchback was haphazardly stuffed with items looking as worn and forgotten as their chauffeur. As we pulled up next to her, I saw the woman was crying. Nothing hysterical, but enough to be noticed. And immediately I felt for her. I think we all do that at some point. (And if by "that" you weren't sure if I meant cry in the car or empathize with a stranger, you're right either way). I didn't know this woman. I couldn't venture a guess as to where she last filled up, at what mile marker the sobbing would cease, or who put her in such a state.

I say "who" instead of "what", because in my experience the "who's" cause more tears.

But there I was and there she was, separated by fleeting white dashes and infinite unknown back story; ludicrous as it sounds the only thing I wanted to do was tell her "si Dios quiere" over and over again until she believed it, and maybe keep at it until I believed it as well. This stranger with the pain all over her face for the whole desert to see, I wanted her to know that, Dios or not, whatever had happened would end up okay. She would end up okay. Her worn-down car and her worn-down life would eventually end up exactly where it needed to be.


It does not escape me how crazy this all sounds. She could have just been a pack-rat that turfed a desert creature and got choked up. But we all inherently carry our personal baggage into our interpretations. And as the white hatchback faded into right-lane oblivion, I hoped that we both were headed en la dirección de la felicidad.