Well it's Tuesday, it's officially December, and I'm wearing these little beauties: 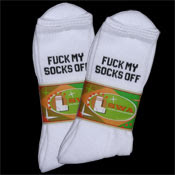 ...so for all intents and purposes, today is officially The Tits.


I like this time of year because I like seeing the truth. Messy, hilarious, awkward truth about families and relationships, the little man behind the great big facade that we're never supposed to acknowledge. It is not usually warm sweaters and easy conversation and foods both tasty and light shared with people you enjoy. It is, however:

- learning a better way to roll a joint on a bathroom floor at 2am Thanksgiving morning, and then laughing hysterically over the fact that things like a turducken actually exist.

-having a round-table discussion with your friend's family about when she'll start having solid bowel movements again.

-joining in on cherry pie with your fingers after it fell on the floor, because there's no sense in throwing it out when the three second rule is in effect.

-hearing the explanation of how Jake Gyllenhaal's face makes Aunt Someone nauseous.

-sitting in another family's living room as they discuss who spilled the beans of a cousin's lesbian engagement to Homophobic Grandma....

-...and then finding out said lesbian wedding is set to take place on Halloween. In full costume.

-calling your own family, 1,000 miles away, to find out your nephew ate shampoo and everyone is getting sauced over a rousing game of dominoes.

-sitting alone in the dark after it's all said and done, no fireplace, no snowflakes, just getting lost in the little lights as you think about all the great things you have in your life.


It is not Martha Stewart Living.
It is not Courier and Ives.
But it is pretty damn magical all the same.

photo credit: Aaron Keigher
see more of his work and follow his 365 days of photos here
Posted by The Duchess at 11:48 AM