it's my party; or, Thelma and Louise return!

Tomorrow is my birthday. 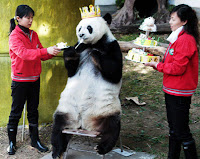 Chinese women? Rubber boots? Cake?
Best. Birthday. EVER.
I love birthdays, specifically mine. Blame it on being an only child, but my birthdays have always been celebrated with pomp and circumstance comparable to a presidential inauguration. Even with all the brouhaha, I've never been big on "wanting." I didn't ever sit and make a list or anything like that. I'm pretty easy. This morning I woke up and AK had put my present next to me like a creepy summer Santa; a two-disc collectors set of The Big Lebowski! I nearly piddled (and instantly wanted to make a White Russian). Point being, I'm not hard to please.

Not to say there aren't a few things that would put a twinkle in my eye. Examples:

(1) Jason Mraz. I was going to say "singing me happy birthday," but let's be honest I don't care if he punches me in the face while filing his taxes as long as he's close. Heavy teenage girl sigh.

(2) Botox under my arms. Supposedly it works? I sweat like a tranny in Texas, and it's not pretty. But $800 to paralyze my pits? I'll just continue to stain my undershirts, thanks.

(3) One day where every street in LA is only open for me. Holy SHIT. Can you even imagine? Post-apocalyptic style, no one around, and I could get from LAX to Burbank in 12 minutes. I would make unprotected left turns for hours, just because I could. Pure. Fucking. Bliss.

(5) A barbecue. We don't have a patio or anyplace to put one, but barbecues are awesome. Even though my desire for one is further proof that I'm a lesbian. Whatever. I'm fine with that. 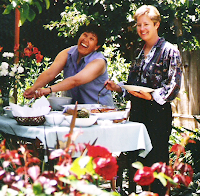 But I doubt I'll wake up tomorrow to a beautiful songwriter, dry underarms, or any of the rest. And that's OK. Of course there's stuff that's fun to think about, but when it comes to actually needing stuff, my mom already sent me razors and some chapstick. So pretty much I'm good to go.