I wasn't the one to send this to Postsecret, but it's nice to know others are sailing in the same boat: 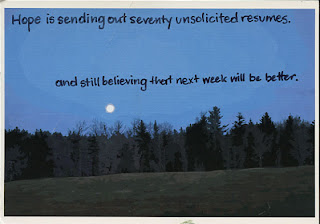 I've already had my scrambled eggs, and after watching half of a True Life (I'd relocate for love, natch) my food has definitely settled enough for me to proceed on to my planned run around the reservoir. Thing is, it's raining. Hard. And while I'm all for romping in the rain, I'm sitting inside a comfy house with two warm dogs spooning my thighs, wearing slippers I stole from a roommate years ago. Actually, upon further review I'm wearing sweats I stole from the same roommate as well. Weird, especially considering he's 6'7" and I maybe come up to his nipples, but size is of no relevance when it comes to comfort.

Not that that has much to do with anything. But if you're jonesing for another hit off the random pipe, the dogs have moved on and my thighs are now cold.

Ohhhhhh the comedy and tragedy of being unemployed. Happy mask or sad mask, doesn't matter much because no one can see you up there in the cheap seats, taking in life's drama as a weekday matinee because why the fuck not? You've got nothing but time.

That was my fancy way of saying other than an interview with The Cheesecake Factory at three, I'm what you would call available.

Comedy and tragedy. What I really should say is I need to be finding a rehab program for a family member, but that one-liner tends to silence the crowd. Instead I'm going to keep watching the rain; it's not providing answers, but it's also not posing more questions.

Final act? If the big Cheese doesn't want me, I could foresee a postscript involving tears on the third floor of the Walnut Creek Town Center parking structure, the exasperation stemming from this, that, and the other but mostly the other.

Ha...as I wrote that sentence, yet another email popped up:


Although we were impressed with your background and experience, we have decided to pursue other applicants who more closely reflect the requirements for the position.


And that was to haul my fancy-educated ass around as a pool boy. No joke.
Comedy and tragedy, how closely they live.
Posted by The Duchess at 9:57 AM